30 replies to this topic

Another person to add to the mix here is the Nazi Hindu mystic Savitri Devi. A book about her, "Hitler's Priestess" is online. http://wnlibrary.com... Neo-Nazism.pdf

She is known to have met with Andrew Fountaine (Monica English's "Bertram") in 1961; here is a photo of her at that time at the British National Party Camp, "on the estate of Andrew Fountaine". (See also wikipedia etc) This is interesting because it is the period Fountaine was associated with Monica English and was not prominent in British politics. He had previously been Conservative member of parliament. He would help launch the National Front in a few years, 1967 from memory; but would quarrel with other members of the Front because his right-wing views did not include anti-semitism. According to Savitri Devi the prominent American Nazi Rockwell was also at this camp.

But where was Monica English in all this?

Sigh.....it is 4:28am in Melbourne Australia where I am and I woke up a bit depressed so I suppose it is fitting that I've made rather a depressing post. I had previously thought that English had known Fountaine precisely when he had not been involved in his far right politics; it seems that rather this was the period when he was playing host to international neo-Nazi meetings.

I think, but cannot a this stage supply hard evidence, that Fountaine was a source for Dennis Wheatley. Wheatley was very hostile to witchcraft.....I have heard but cannot now remember the source, that Monica English's circle was involved in worship of Epona the ancient Celtic horse goddess related to chthonic Demeter...very appropriate to a horse-riding set of gentry I suppose. But I'm wondering what connection it has with traditional witchcraft....

That this lady mentioned about the meeting at Narford Estate in 1961. That would be at the time when Andrew Fountain was involved with Monica English and Wicca too.

It is the Fall soon.

Time for my Fall - Winter offensive in the researches, another great season to begin !


Recently I recieved contact from members of the Summersell Davis family. Monica's first husband was John Summersell Davis. And it is interesting that part of the family is buddist and have the intutive abilities.

Will find out more soon. .


A while back I recieved the photograph on Monica English that I ordered from the Newspaper, Daily Mail.

But didn't get a chance to scan the picture until today. Will be putting them on the website soon but I thought I post it here too.


The significance of this photograph is it is the first time I saw the face of the woman that I have been researching about for a while. We do have the 1956/57 picture of her but with her back to the camera.


This is Monica English posing with her painting for the camera and she is surrounded by her hunt beagles. She was the Master of the hunt. Taken at the Bridge House in Gayton, Norfolk. Not sure when photograph was taken so it could be 1950's or 1960's.

Also lately recieved picture of another of her paintings from a person in England, will add that to the website as well soon. 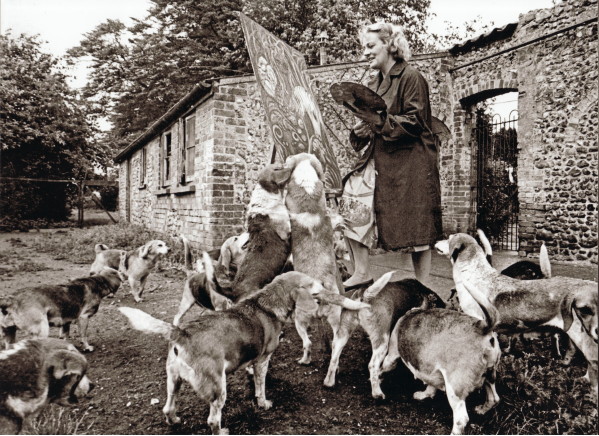 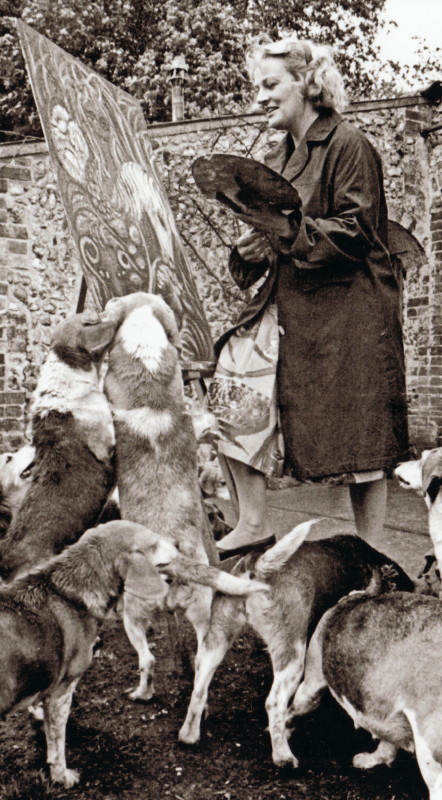 Here below is the link I notice I failed to post in my last post, Savitri Devi at Narford in 1961. Some the other photos in this series are also of interest. Worth tracking down Beryl Cheetham, and also Diana Hughes a Nazi woman in another of the photos. They must have met Monica English. Notable though that neither Andrew Fountaine nor Monica English are in any of these photos. Fountaine was a fascist but not a Nazi; the British National party of which he was president was, I understand, a revival of Mosley's British Union of Fascists. Monica, of course, did not necessarily share his politics. We know that there were tensions within her coven at this time.

May 1961
Narford, England
Left to right: Bruno Ludtke, Savitri Devi, and Robert Lyons at a British National Party camp on the estate of Andrew Fountaine.

Thanks for the link to the Savitri Devi Archive

Kind of eerie to see those people dress like neo-nazis on the Narford Estate in 1961.

It would be a scary thought to find out Monica English had some ties to the Right Wing fring groups of the United Kingdom but that is history, it would add another chapter previously unknown.

This is like one of the demons of my past coming back to haunt me....

It is starting to make me remember a part of my life where I later chose to forget and bury.

It reminds me of the younger me, part of my life where I did glorified the war machine of the Third Reich. I was always reading the history of World War II and building dozens and dozens of models of German tanks and fighter planes. Took great interest in the German jet fighters and the V rockets. Seeing the video of the first successful V-2 rocket launching was interesting because that is the actual birth of the United States Space program. As we know after the war we took the technology and scientists and our space program grew mainly from that origin.


But then for some reason unknown I threw it all away and buried it.

One reason perhaps the fact that my father fought against the Nazis in World War II and in Europe over 65 million dead because of that war.


I sent an email to the young lady named Gabriella who is the webmster of the site. It mentioned that she is also interested in Pagan religion. I asked her if the name Monica English ever came up. If she does not know she will probably forward the letter to the other person called the archivist.

Well, the Nazis are pretty interesting; especially the whole pagan revival side that Savitri Devi focusses on. There were some on the Allied side who ascribed their early victories to a comparatively egalitarian structure within the army and the improved morale that led to. Surprising perhaps. Savitri's writings are fascinating as a view of what made an intelligent highly ethical Nazi tick.....fascinating and disturbing of course. She wasn't some kind of Nazi-lite, a Strasserite or whatever, she was very much the real article. The prominent Nazi Rosenberg has been claimed to be a disciple of Gurdjieff, a teacher of whose work I am fond, and an unconfirmed rumour has it that it was Gurdjieff who suggested that the swastika might be a good symbol for the Nazis. Gurdjieff however had Jews among his disciples and for other reasons also was clearly no Nazi. Still, it is too easily forgotten that the Nazis were not particularly isolated in their views before the second world war.

I've sometimes thought that people can be divided into natural "Shiva" people and natural "Vishnu" people; I am on the Shiva side myself. I'm a little comforted to see that Savitri Devi was on the Vishnu side!

Was checking the British Newspaper Archive for any new material that might of been added since the last time I checked.

Found a small article that mentioned Monica English's first husband in which letters of administration was granted to his wife.

So now we have another location of where Monica English lived.  Wonder why she lived at the Charlton House in Hartlebury, Worcestershire in 1946?

She still had the property at Cheltenham until it being sold of in 1948.

So got to do more checking around.

Monica English's coven is said to go back either 200 years or to Saxon times, according to the Cauldron article no longer online.

200 years is quite credible. It takes us back to when Sir Andrew Fountaine built Narford Hall. He was a cultured man who might easily be imagined as founding or re-founding or protecting or being associated with an esoteric group. It also takes us back to the end of the major witchcraft persecition. Witchcraft had ceased to be a capital offence with the Witchcraft Act of 1735 by which time no-one had been hanged for witchcraft in England since 1719. So setting up a formal witchcraft group had then become relatively safe.

Back to Saxon times? The clue here I think lies in the claim that the English coven worshipped the horse goddess Epona, equated with chthonic Demeter. (I don't know if that is in Michael Howard's recent book, but the claim has circulated privately anyway). Horse worship has a long history in the area, actually going back before Saxon times to the Celtic Iceni, Boudicca and all that. And of course the area was dense with Toadmen etc, whether or not there was a continous horse-magic orgaization in the area there was certainly a long standing culture associated with horse magic. Now, here is an interesting point. The connection of ostensible "witchcraft" with folk Catholicism has often been made. Now, it is a fact that in the early part of the 20th century the Catholic Church in Norfolk was closely associated with the farm workers union, which would have brought them into contact with Toadmen and the like; and there seems to have been some Catholicism in the Fountaine family too, I dug up a few references to it online. There are old aristocratic Catholic families in Norfolk. Howard mentions that a catholic priest was associated with the English coven and also that a local aristocratic couple served as its patrons.....(I'm referring to the artcle from memory).

The Catholic connection really needs to be looked at.

Dropping past after an absence of I think a few years, hi people!

Just clarifying that yes Michael Howard in "Children of Cain" page 235 does put in print his information that Monica English's group worshipped the ancient horse goddess Epona. It may or may not be significant that there had been information on Epona in an article in Folklore about 1955.

Howard describes the ritual of the group in a way that makes them sound to my mind a bit like Mevlevis, "Whirling Dervishes", that may be a completely false impression of course. But Fountaine was apparently a travelled man.

Dropping past after an absence of I think a few years, hi people!

Good to see you, Froglover.

If I break faith with thee, may the skies fall upon me, the seas drown me, and the earth rise up and swallow me.

Perhaps It wasn't Epona though and Howard assumed that facet (Epona wasn't a Saxon goddess).
Settlement myths of the early Anglo-Saxons tell us that two semi-divine twins named Hengst and Horsa are credited with leading the Angles, Jutes, and Saxons to what is modern-day Kent and East Anglia. In the myths, Horsa was killed fighting the Britons whereas Hengst became the first 'King' of the Saxons. Very telling, and quite a familiar myth in comparison.

Back to History of Witchcraft